You are here: Home / Communication / News / The Stockholm Convention as a global vehicle for pollution reduction from... 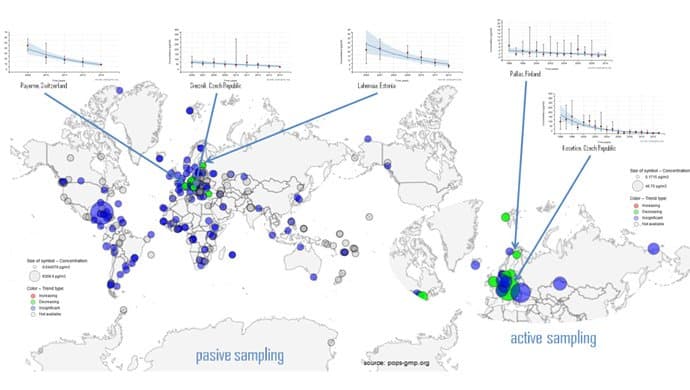 POPs are a group of chemicals that have toxic properties, resist degradation in the environment, bioaccumulate through food chains and are transported long distances through the atmosphere, water currents and migratory species, within and across national boundaries. POPs belong to three main groups:

The twelve “legacy” POPs, initially listed in the Stockholm Convention (shown above in bold), were first produced and/or used several decades ago, their persistence, bioaccumulative properties and potential for long-range transport are well studied, and they have been globally banned or restricted since 2004. Since then, 18 more substances have been added to the Convention.

The Stockholm Convention has catalyzed POPs monitoring activities and research worldwide and triggered increased awareness and knowledge about these chemicals. The global monitoring plan for POPs, which has been put in place under the Convention, is a key component of evaluating its effectiveness, and provides a harmonized framework to identify concentrations and trends of POPs in humans and environment, as well as information on their regional and global environmental transport.

For most “legacy” POPs, concentrations in air have declined and continue to decline or remain at low levels. Primary emissions are believed to be the main driver for POPs levels in air, however, secondary emissions of previously deposited POPs and climate factors can also influence temporal trends for POPs.

Industrial POPs are still present in products and building materials, including their waste, long time after their production and use was phased out. Similarly, sites contaminated with POPs contribute to secondary releases and constitute serious hazards for human health and the environment.

Relevant guidance has been developed under the Stockholm Convention and the Basel Convention on the Control of Transboundary Movements of Hazardous Wastes and their Disposal and can be found at www.pops.int and www.basel.int respectively.

The worldwide implementation of the Global Monitoring Plan is made possible thanks to the generous contributions to the Stockholm Convention Voluntary Trust Fund from the Governments of Japan, Norway, Sweden, and through the European Commission’s Thematic Programme for Environment and Sustainable Management of Natural Resources, including Energy (ENRTP).

Further, the contribution of the projects to support POPs monitoring activities in regions, funded through the Global Environment Facility (GEF) and the Strategic Approach to International Chemicals Management (SAICM), is greatly acknowledged.

Monitoring activities, and data collection and analysis are implemented in the five regions of the United Nations in cooperation with strategic partners and through involvement of Regional Organization Groups and Global Coordination Group.